Traditionally, the United States has supported science heavily, and the investments have led to our standing as an international scientific leader.

This situation is beginning to falter as other countries are making large investments in science with high expectations of academic and economic benefits.

In particular, several east Asian countries are emerging as leaders. Singapore is a small island country with major commitment.

China and Japan are also major investors in science.

The U.S. populace is divided with respect to science. A large fraction of our citizenry is well informed and highly supportive of science.

Unfortunately, a subset of our countrymen exhibit a lack of scientific understanding and often question the validity of future financial commitment to science.

Depending on which of these two camps controls the government, our scientific pre-eminence may decline. 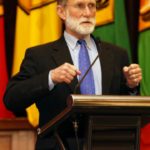 «Scientists Should Spend Time in Industries, Learn Their Problems»