Some scientists regard Cryo-electron microscopy (Cryo-EM) as the biochemistry of the new era for allowing us to gaze into the secret complexes of structural biology. Undoubtedly, this revolutionary technology has allowed us to see biomolecules as never before.

To delve further, Ciencia del Sur talked to one of the founders of this discipline, the biophysicist Dr. Joachim Frank (Weidenau, 1940), recently awarded the Nobel Prize in Chemistry along with Jacques Dubochet and Richard Henderson.

In this brief but revealing interview, Professor Frank says he thought researchers behind the CRISPR-Cas could have won the Nobel Prize in Chemistry, and that we are not yet in a new era of biochemistry, but that it will come soon.

Joachim is a professor of biochemistry and molecular biophysics at Columbia University. He was born in Germany but acquired the US citizenship. He studied physics at the University of Munich and the Max Planck Institute for Biochemistry, where he completed his doctorate.

– Is Cryoelectron microscopy a scientific revolution?
Well, it is a combination of many years of techniques development leading to steady progress, followed by a rapid development of camera technology that removed a hurdle to achieving high (near-atomic) resolution.

– Was structural biology transformed with your work?
Yes, definitely. Cryo-EM fills an enormous gap since structures of many molecules can now be solved that could not be solved by X-ray crystallography.

– Is it true that in the future it will be possible to obtain images at the atomic level of the complex circuits of life?
It is already happening now.

– Has your work ushered in a new era of biochemistry?

No, the full effects are still to come.

– Did you expect the Nobel Prize in Chemistry this year?
There was a very slight chance. There are so many competing innovations and discoveries – think of CRISPR!

– What was your first thought when you got the call from the Nobel Institute?
I immediately thought it was a call from Sweden, since who else would call at 5:18 in the morning?

– Will you continue working even though from now on you will have more interviews, trips, and conferences?
Yes, with the help of the internet I can still keep in touch with my ambitious team.

– What do you recommend to young scientists from undeveloped countries such as Paraguay?
I very much hope that such countries will gain the resources needed to build centers of technology, or form consortia by regional agreements to jointly operate a center.

Meanwhile the best young scientists can do is to go on visits/sabbaticals/internships to places where Cryo-EM is fully developed, so they can get training and collect their first exciting data. 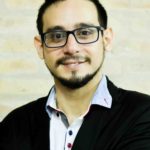